Interview with The Prisma: “Latin Americans are an invisible community”

I was recently interviewed by Francisco Castañón of The Prisma Spanish Language newspaper. The interview was in Spanish and has been translated for publication as below. A few bits did get lost in translation (I am not sure the prison is the Borough’s landmark!) but I welcomed the opportunity to highlight the recent QMUL report No Longer Invisible: the Latin American community in London, highlighting the 200,000 Latinos in London.

The interview was published at http://www.theprisma.co.uk/2013/08/11/martin-tiedemann-latinos-are-an-invisible-community/

He is councillor for Brixton Hill, a district in the London Borough of Lambeth that boasts London’s largest Latin American population. He is also a member of Friends of the Earth, the GMB union and the London Cycling Campaign.

With an Argentinian mother and German father, Martin Tiedemann is one of the first of Latin America’s second generation in London. His parents came here forty years ago, and 10 years later the Falklands War took place. Despite being only six-years-old, this event marked a turning point in his life because his parents sacrificed, in part, his Argentinian roots.

He was raised in Croydon, in the South of London and has always mixed with people from a wide variety of backgrounds.

At the moment, he is Co-Chair of the “Socialist Society” (SERA) of the Labour Environment Campaign and is an active member of the  “Co-operative Party”, in addition to being a member of Lambeth’s Labour Party.

Martin, who works alongside CLAUK (the Coalition of Latin Americans in the UK), which represents the collective interests of the Latin American community in the UK, has been speaking to The Prisma about his work as councillor and his vision for this community in London.

When did your career as a politician start?

It started at university while I was studying biology and environmental politics. I was really interested in the “Green Wave” movement so I joined several groups. And, even today, I’m still in joint charge of SERA, Labour’s Environment Campaign.

When I left university, I was elected councillor in Croydon in 1998, a position I held for eight years.

Now, I live in Brixton Hill, in the London Bourough of Lambeth, and my district just happens to be home to London’s largest Latin American community, but London’s total Latin American population is 200,000. Theirs is an invisible community because most Latin Americans prefer to keep a low profile, though the majority are here legally. Nonetheless, many don’t want to be identified as Latin Americans and even if they did, in reality the opportunity to do so is not there.

So, they find themselves in London with British, French, Spanish, and Italian passports rather than Latin American ones and, even when the opportunity to declare their ethnic and racial origins (in official documents etc.) does present itself, Latin American is never one of the options offered, just white, black…

What does your work involve?

As councillor, the majority of your time is taken up with dealing with problems that affect the community and its citizens. We hold a surgery once a month at ten in the morning in Lambeth Town Hall which constituents can attend though some prefer to make contact in writing or by telephone.

But many people need personalised assistance, it is also important to visit people and to attending community meetings to find out how we can better help the local community.

Brixton Prison is the borough’s landmark and we have invested lots of money in it. We also do a lot of work with communities in the district’s estates. In short, we try and make improvements wherever we can.

For example, I am on the licensing board which oversees the granting of alcohol and gambling licenses to establishments such as shops and restaurants wishing to sell alcohol or casinos and betting shops in the borough.

What kind of finances does your borough have at its disposal?

We raise about a quarter of our funds locally, the other three quarters come from central government. Lambeth gets a little more than other boroughs as it has a high population and suffers from relatively high levels of poverty and health problems.

However, the government has cut half of its funding over the last three years, so we have had to make many changes, putting a stop to some projects and cutting certain services – a tragedy and at the same time a real problem on a practical level . As councillors, we find it really difficult having to make these decisions. We don’t want to cut any of our services but with only half the funding we can’t invest and spend as we used to.

What do you think of the Government’s policies on immigration?

Over the last few weeks the government has been circulating a van with “In the UK illegally?” and “Go Home” on its roof, aimed at illegal immigrants. I think it’s a travesty because the majority of people from other countries are living here entirely legally, working and paying their taxes like everyone else, and playing their part in growing this economy and advancing this multicultural society. These are immigrants just like me and as members of the immigrant community we see this as a message from the government saying we are no longer welcome here.

A few days ago the Home Office said that many people are being sent to prison for not having the correct papers. But, in this country, unlike in others, it is not a legal requirement to carry  your papers on you at all times.

Moreover, the police have been concentrating their efforts on non-whites such as is the case in Brent and Haringey where there is a large population of first and second generation immigrants, which makes it look like the Government is trying to send out a message. Whichever way you look at it, the Government has got it in for us.

Do you think the number of illegal Latin Americans living in London has gone up?

There are illegal immigrants here, just as there are immigrants who hold student visas, and immigrants waiting on asylum applications and others simply here in search of a better life. Whilst the country can’t accommodate them all, we do have to bear in mind that they are only looking to improve their lives.

Remember, we do also have illegals from  Australia, New Zealand and the United States, but it seems that only the African, Asian and Latin American communities are being targeted.

85% of Latin Americans are in work and paying taxes, and 70% of them are well educated. In other words, they represent a hard-working, well educated workforce, many working for a pittance and doing far more menial jobs than they did in Spain or Latin America.

What about their impact on the NHS?

There has always been what the government refers to as “health tourism” –  foreigners with already existing ailments who come in search of treatment because their own hospitals back home are perceived as being so poor.

But, the reality is that this isn’t that big a problem here, though politicians and daily newspapers are brandishing it as an immigrant problem.

So, now every time an immigrant does have to visit the hospital they have to show their papers, something never asked of British nationals.

Do you think there are still job opportunities in London for Latin Americans? 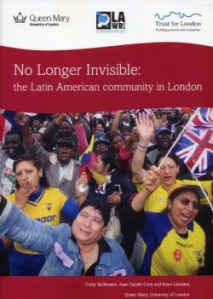 So far as the paper “No longer invisible: the Latin American community in London” is concerned, it would appear that job opportunities do still exist in London and that Latin Americans are still coming over and, once in work, they even manage to send money home. And, many decide to stay because of these very opportunities, which is what happened in my parents’ case. However, it is also true to say that the majority of people who come to London wouldn’t have been working in the cleaning or catering sectors in their own countries.

Latin Americans can be found at every level in the economy, with many coming over as employees of Deutsche Bank or Citibank for example, which is to say there are many professionals amidst their ranks. Moreover, the majority of them are educated to degree level and beyond.

However, perhaps as many as 95% of them start off in menial jobs and unfortunately, remain stuck in them.

Clearly, then, there is a problem. The fact that those who come here and work and pay their taxes can’t break free from these menial jobs must have something to do with the language barrier. Yet, a key service made available by central government – that of English language classes –  has unfortunately,  begun to be phased out in many places, as a result of ever rising costs.